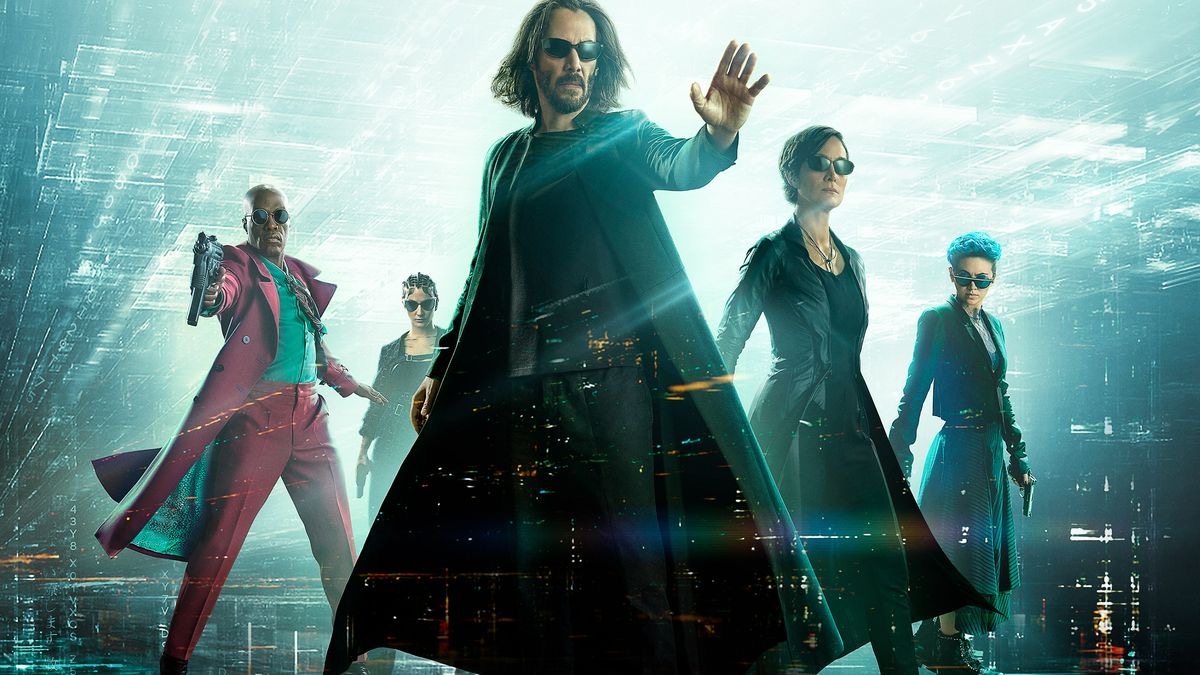 The Matrix Resurrections review: Warning, spoilers for the WHOLE movie!

I had a weird perspective going into The Matrix: Resurrections, I was busy over the holidays so I only got the chance to watch it on Boxing Day – after all the reviewers and tweeters had seen it. I have never seen a movie so quickly polarising, so staunchly marmite that it only made me more excited to see what the hell Lana Wachowski had produced. In my mind The Matrix is a franchise of two halves. One half is built up of its incredible action, cinematography, high budget VFX and famous faces – the other a meticulous and deep look into different philosophies, slow burn conversations and deep lore. I would imagine most people have a preference for one and tolerate the other, and some people have a passion for both, and others just enjoy the surface story told by the trilogy. I fall into the second category, I find the action and the philosophy are equally enjoyable.

What made The Matrix: Resurrections so enjoyable for me was its surface story. The action and philosophy are both there, but I think Lana had a heartfelt story to tell this time. Unlike the other three, who’s plot surround the wider world, the entrapment of minds, the extinction of the human race due to their own hubris in passing the singularity, The Matrix: Resurrections is about love. It is a story about two lovers journeying across the rivers of death and back just to be with one another, and in a way that simplicity breeds beauty.

The Matrix has been reset, updated to its latest version. The machine/human war continues, but both sides have changed significantly due to the actions of Neo during the siege of Zion, the biggest change being the creation of a new faction – the sentients. The amount of care that Lana took with her world is evident, the beauty of the underground world has been missed. Gone is the mechanical tower that the people’s home surround, the slop they ate, the ragged clothes they wore. This new city, Io, is expansive, beautiful, full of life and light – provided by their new Bio-sky (very very cool).

But we don’t start in Io, we start in the Matrix, and what a nostalgic way to open the film. The opening scene is essentially a reshoot of the original opening scene, the same lines, the same action – until it isn’t. The opening scene is a microcosm of the story Lana is trying to tell, of repeating the same stories, of the connection between the artist and their art. In this way I think The Matrix: Resurrections is the most successful of the entire franchise at showing its themes and subtext to the viewer, in that its themes aren’t at all subtextual. The movie is, quite boldly, meta and almost fourth wall breaking. It teeters on the edge of just telling the audience what its on about, but the beauty of The Matrix, of this simulation within a world that we already suspend our belief for, is that this suspension of disbelief is squared. We are more open to weirdness within The Matrix that tests our suspension because it’s a simulation within an artificial world. Lana uses this to tease the boundaries, to the extent that they outright mention the circumstances in which the idea for this film were created – studio pressure from Warner Brothers. Every returning character is some larger than life twist on themselves, hyper realised versions of characters that were never subtle in the first place. They all hit the mark, except for Smith. Smith is the only character that feels amiss – like he is there because the studio wanted him back. Perhaps that’s the point, that his recasting and new role within the story is trying to point out. Yet again Lana uses the dialogue within The Matrix to outright explain his existence – that he exists to be in conflict with Neo. It is completely understandable why this may turn some viewers off – this weird relationship the movie has with its audience completely different from the previous entries’ serious tone, but I believe that is what makes this sequel so fantastic. It is a sequel that knows it didn’t need to be made, and so does everything in its power to be interesting and original – once again the movies tells the audience this directly, when the game designers are pitching their new ‘Matrix’ game.  The movies feels like a project that never wanted to be made, and so decided to be original and exciting out of spite for the studios that forced it into production – at least that is how I felt from Lana’s latest production.

Maybe I got off track there, but as I said earlier the movie really is just a simple love story, once again, it tells us straight to our face as the Analyst monologues about the ‘bond’ Neo and Trinity share. Their power when they touch is palpable, blowing bad guys away and protecting them at all times. It’s very on the nose, but when it is so intentional its hard to see it as a negative. The story allows for us to see as much of the world as possible, and that is much appreciated. I think a ‘save the world’ style story would undo the sacrifice Neo made at the end of revolutions, and wouldn’t fit with Lana’s ideas for her story. The story, to me, felt very intimate when it got into full swing. From the moment Neo escapes The Matrix, the world feels smaller than it did previously, due to the limited cast and interactions between the characters. It works in the movies favour, keeping the focus on the story being told whilst also slipping in bits for those who are interested in the overall lore and what happened in the last 60 years of The Matrix.

The philosophy isn’t as strong or as exposited in this movie, again in service of the story. There isn’t much left to philosophise on, Neo and the audience understand everything that had been said in the previous trilogy, and there was no need to rehash it. Setting up a whole new conversation would take away from what had been said previously, and also would distract from the story, something Lana clearly didn’t want to do. Instead the philosophy is replaced by that conversation between art and artist, as I mentioned earlier. It is the connection between what an artist creates, and how they feel about it – from the moment they create it to when they look back upon it years later, and Lana did a fantastic job of translating that in to a meta narrative that never quite breaks that fourth wall, the movie just leans on it.

As for the action and VFX that helped sell The Matrix as a global hit? Disappointing. As an action fanatic, a lover of all things Wick, Matrix and Mad Max, The Matrix: Resurrections is a disappointing mix of quick cuts and slow choreography. That isn’t to say it doesn’t have its highlights, Keanu Reeves is still an incredible martial artist at the age of 57, as is Carrie Ann Moss, but the movie makes little attempt to highlight it. In the rare few scenes we do see them throw punches, the choreography feels slower, more powerful, more deliberate. The best action in the movie is the scene in which Neo fights Smith in a small concrete room. There is little talk between them this time, no posturing on the nature of inevitability, of choice or consequence, just two old rivals throwing punches for the sake of the audience, and its appreciated. Each of them seem calmer, older, understanding of each other and their abilities – like two old friends sparring. The punches hit with a powerful impact, sending ripples across the room and blowing one another back – a throwback to the anime style punches of Revolutions. It was fantastic to see, though it certainly made me miss Hugo Weaving’s Smith – their battle would have been legendary!

There are some moments that certainly amaze, but also parts when characters (Morpheus) stand still and shoot into a crowd of enemies – with little excitement to be had. It feels out of place, even for the Matrix, when we had Trinity and Morpheus flipping and running up walls to dodge bullets in the original trilogy. Even the moments in the end of the movie, with Neo flipping cars and force pushing a swarm of bots out of the way don’t amaze or excite. It certainly feels disappointing for such a monumental action staple, but that isn’t to say the action is bad. It just isn’t anything special.

The VFX undergoes similar treatment. The landscapes and world that are produced by computers are gorgeous, with 20 years of development creating new wonder for the machine world and Io. The bullet trails on slow-mo bullets look as fantastic as ever, and I would like to draw attention to just how smooth and cool the agents look dodging bullets as they run. That was one of my favourite effects in the movie, the slight flicker as an agent twitches his head out of the way of a bullet and back – perfectly done. However, there was nothing that impressed me, the VFX isn’t bad, it just doesn’t have that new ‘bullet time’ that the movie alluded to in a meta fashion at the beginning.

The Matrix: Resurrections is a wholly different movie to the trilogy. It doesn’t have the flashy action, the philosophy, the world ending stakes. It is a much slower paced personal tale about two lovers trying to come together, whilst also being about the real relationship and artist (Lana) has with their art (The Matrix). It is about a sequel being made under circumstances in which it never should have been, and trying its best to be something new, something devilishly divisive in spite of the studio forcing it to be made. The Matrix: Resurrections is not going to be beloved like the originals, but I believe It achieves everything it set out to do, and I respect it for that. It isn’t my favourite, as a lover of the action and philosophy of the originals, but I really appreciate what it *does* do rather than lament what it fails to do. The story is solid and intriguing, the world is as alive as ever, the small cast are intimate and lovable, and the meta narrative that teeters on the edge of that fourth wall is novel and bold, especially for a Hollywood sequel. In all honesty it is a miracle this film was made in this fashion, but I’m glad that it was. It was a movie-going experience I’ve never had before and for that I really enjoyed what The Matrix: Resurrections offered.