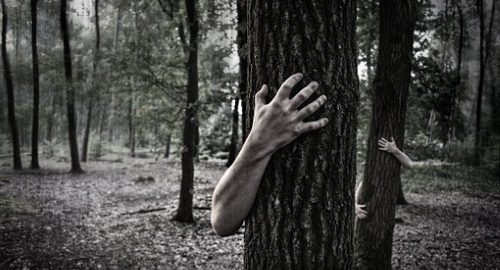 I’m not sure when we started noticing them. We only know that they definitely weren’t here when we arrived. Sam was first, went for a piss in the middle of the night only to see a young girl next to a tree. He’s not stupid, he’s seen horror movies. He took out his phone, took a picture then ran back to camp with his todger between his legs.

It’s not like were in the middle of some deep haunted woods, we’re on an official campsite, been here many times in fact. Horror movies aren’t always right then. Horror can be anywhere it wants to be.

Jessie noticed them next, the young girl was naked, her arms wrapped tightly around a tree. Then she saw a middle-aged man and a teenage boy. All naked, all hugging trees. It was the middle of the day, so with her fears slightly subdued by the daylight, she shouted out to them, asking who they were what they were doing.

We had all thought that Sam had photoshopped his picture to scare us, but with Jessie’s corroborating story and scream we thought it best to pack up and leave. That’s when it got worse, like they knew what we were planning to do, they couldn’t let us leave.

The group, still at the campsite, were slowly surrounded. We began to see them everywhere, always naked, always hugging trees, but always different sexes, heights, ages. I would have been more comfortable with shambling zombies, at least then we could have seen the threat. These… People. We couldn’t even see their faces, and we were far to afraid to try and circle them to see what was behind the tree.

Every hour or so, another few trees had inexplicably gained huggers. The first of the trees had begun to crack around the bark, as if the huggers were crushing them under their might. We couldn’t go anywhere, we were camping on the shore of a lake, and the way out of the campsite was a short hike through the tree huggers to the car. I suggested leaving the tent and campsite and making a run for it, but everyone was frozen with fear. I’m not sure I would have been able to through with it anyway in the state we were all in.

I just couldn’t stop looking at them. The trees almost seemed to grow them, arms protruding and wrapping around like vines – like parasites. Alex and Sam managed to hype one another up before nightfall, probably had a shot or two of the vodka we had brought for the evening for a bit of Dutch courage.

The wind whistled through the canopy above us, skated over the lake behind us, but the tree huggers stayed silent. The world seemed dead ahead of us, any green brush, leaves or tiny creatures had disappeared. The area they had claimed seemed drained of life, with only dead twigs and brown broken leaves.

“We’re going to get the car, drive it into the woods, and then you guys are going to join us ok? You’ve just got to hold on until then!” Alex and Sam’s last words, unfortunately. They both burst out of the campsite, into the Tree hugger’s zone. Immediately Sam fell to his knees, not making it two steps. Alex made it a little further in, whilst the tree huggers left their trees. They had no discernable features, no faces, no hair, no bellybutton – nipples – genitals. They were blank figures, stalking toward a Sam who seemed to get thinner and thinner and he screamed into the air.

I anticipated what was about to happen, but I could make no effort to stop it. They hugged him, squeezed him with all of their might. The pop his head made as the pressure severed his skull from his spin, as his bones cracked, and blood began to leak between the cracks in their pale skin will forever be etched into my memory. Alex had made it through the zone directly in front of the camp, and we screamed at him telling him to run faster. He slowed to a jog, unable to keep up with his full sprint. He seemed visibly older, his shoulders sagging, and his head firmly pointed at the ground. Two of the huggers left their trees from the back of the group, and in a grotesque motion twisted their limbs so they could lower onto all fours. With splinters of bone spiking through their pale skin, they burst forth like wolfs on the hunt. Their faces broke into snarls, the patch of skin where a nose should have been lengthened into snouts. Alex didn’t make it far, as you may have guessed.

Which brings us to me and Jessie. Our boyfriends are both dead, night has fallen, and every time a look up from my phone I can see another hugger one tree closer. Our only hope is that they are somehow afraid of fire – at least that’s our only guess as to why they haven’t killed us in the same fashion as Sam and Alex…

We don’t have much firewood left. It wasn’t supposed to burn all night long. There is a tree right next to the camp, and we do have a small emergency axe, but every time I think about going to chop a bit off of it, I imagine a tiny girl slowly wrapping her arms around the tree, then around me.

I’m leaving this note in case we don’t make the night – it sounds ridiculous, I doubt any of you will believe it. But it’s a warning – do not camp in these woods.