In the midst of colour, in flurries of motion, little hearts bounce across the woodland landscape. Deep in Canada, in the lush green of tall trees and small bushes, these creatures stay hidden, fearful of the modern world and the giant apes that now rule it. Forgotten by time and forever unseen, their little societies are hidden beneath the brush, in networks that span the breadth of their lush empire.

They’re called the Parva Corde, tiny woodland creatures, living bark imbued with a beautiful energy, their chests burst with ruby light. This ruby light contains all the love and positivity of their species, in each little heart, but also the darkness that the forest has to bear witness, each predator and prey, each forest fire, each human deforestation. Their eyes number four, they see it all, all of that horror contained within the ruby light.

The Parva Corde cherish the life in the forest, galloping from creature to creature with their backwards facing knees and soft three fingered hands, to share that ruby light, for better or worse, to each and every living being within the forest. Plants grow upon their bodies, sharing the nutrients they offer, that they generate, with the very life force of the woodland.

With ever lost tree, every endangered animal, their light dims a little more, and they’re terrified. Terrified of what they have to lose, as the secret rulers of the woodland, the monarchs, the authority, but also the protectors, the protectors that are struggling to do their job.

And so one of the Parva Corde, Vitae, decided to leave the forest in search of a cure, hitching a ride on a passing car, and journeying to the centre of the modern Jungle. 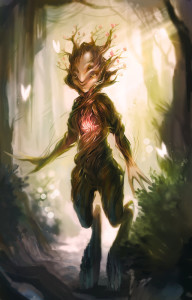